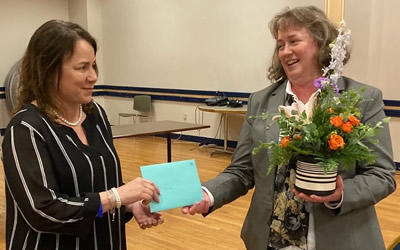 After announcing her retirement from Lake of the Ozarks Council of Local Governments at the May MACOG Board meeting, Linda Conner officially stepped down as MACOG President at the June MACOG Board meeting. Then Vice-President Cindy Hultz, Mark Twain Regional Council of Governments, was installed as the MACOG President for the balance of the open term.  Linda has been with LOCLG since 2011 and was instrumental in elevating the regional planning commission in its service and support to its member local governments. Linda was elected MACOG Vice-President in 2016 and assumed the MACOG Presidency in 2018. Under her tenure, MACOG and its member RPCs successfully completed two major statewide disaster recovery planning grant projects and is poised to receive substantial grant funding for a planned statewide broadband technical assistance planning initiative in partnership with the State of Missouri. Linda’s leadership also helped elevate RPC support in the General Assembly leading to successive years of increased State Aid to RPCs in the state budget. She plans to oversee a smooth staff transition at LOCLG and will make herself available to MACOG over the coming months to support ongoing planning and coordination efforts. President Cindy Hultz appointed an official nominating committee to propose a nominee for the vacant Vice-President position and prepare a slate of nominees for the election of officers at the MACOG Annual Meeting in January 2022.